When most people in the United States think of the month of March they think about Saint Patrick’s Day, with it’s green color scheme, and love of all things Irish.

However Saint Patrick’s Day flattens out a robust culture to a few tired stereotypes. Archeologists believe that humans first stepped foot on the island around 10,500 BC/ BCE. Since that time it has been home to many groups including the Celts, the Normans, the Romans and the British. Due to so many groups living there over the centuries, Ireland is full of history and symbolism. Ancient Irish culture, specifically the Celts, have inspired many designers. 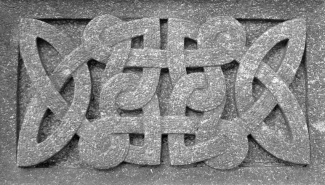 Before I talk about the hallmarks of Celtic Design as we know it now, I want to delve into history a little bit. Although they first appeared in ancient Greek and Roman texts around 2500 years ago, the Celtic peoples lived across Western Europe during the Iron Age.  They were referenced in these texts as a single group, but that wasn’t true. The Celts were tribal and nomadic people with not one tribe or region, but around eight of them.  Each region had a separate language. Today only Irish Gaelic, Scottish Gaelic, Cornish, Breton, Manx and Welsh are still spoken.

The Irish Celts had a vibrant culture that centered around the clan system. They created art for all types of purposes, some we know about and some are still a mystery. A lot of the art left behind is stone and metal work, which doesn’t give a clear picture of all of the art that was created by these groups. Much of the art we do know about was created but monks but not all of it. It was very ornamental, featuring very little symmetry and preferred curved lines to straight lines. Celtic artwork shows influences from other cultures and features a variety of spirals, knot work and figures and more.

A few of the hallmarks of modern Celtic Design include:

It’s still a very popular style of design.  It calls to us through the ages because it gives a chance to embrace our roots and explore a time and a people that we don’t really understand.